Independents back on top of the polls 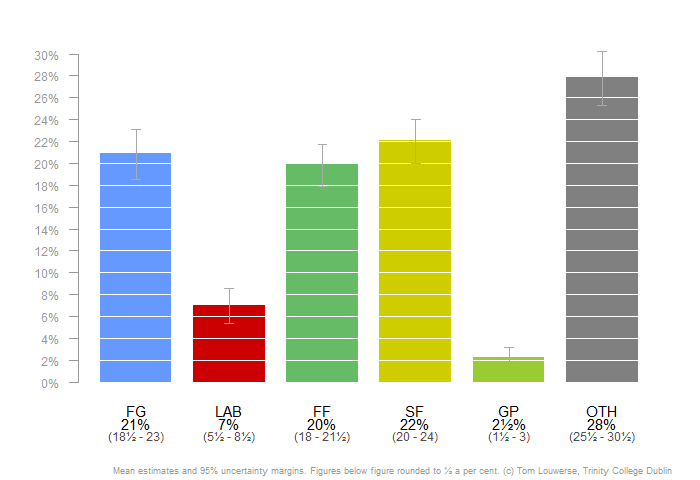 Independents and others are back on top of the Irish Polling Indicator, which combines all Irish opinion polls to one estimate of current party strength. They are now on 28%, with an uncertainty margin of +/- 2.5%. Fine Gael has been loosing support since early September and is now on 21%, with Sinn Féin on 22% and Fianna Faíl on 20%. The differences between these parties are so small that we cannot definitely say which one is currently the largest of the three.

Both Sinn Féin and Fianna Faíl have been relatively stable since the local and European elections in May. For Fianna Faíl his presents a decline in electoral support compared to autumn last year. Sinn Feín made about a 5 percentage point gain between January and June, but has seen little change since then. While the party might benefit from poor government ratings and opposition to water charges, the Maria Cahill affair is likely negatively affecting the parties' electoral fortunes. According to a recent Irish Times/Ipsos MRBI poll, 32% say they are now less likely to vote for Sinn Féin, with only 3% saying they are more likely to support them and 59% saying it has no impact. The report does not show how these percentages are among those who are not completely sure about their SF vote or seriously considered voting for the party before.

The Irish Polling Indicator calculates a 'best estimate' of parties' standing in the polls, based on reported opinion polls from all major Irish polling firms, Behaviour & Attitudes, Ipsos MRBI, Millward Brown and Red C. Explore all results from the most recent Polling Indicator here.